CfAR links research across a wide range of disciples within astrophysics and relativity broadly. The research currently undertaken includes Exoplanet research, proto-planetary disk research, high energy astrophysics including gamma ray bursts and both research into the astrophysical and relativistic treatment of black holes. 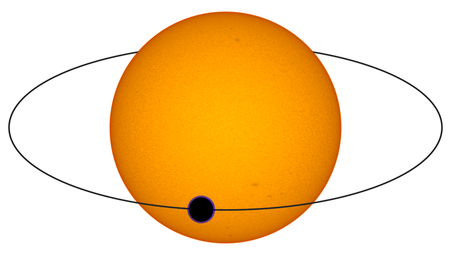 The discovery of planets orbiting a star other than our Sun (exoplanets) has triggered a monumental shift in the astrophysics research landscape. Thousands of exoplanets have been discovered to date. Through advances in both technology and analysis techniques, it has become possible to characterise exoplanet atmospheres. The main focus of these atmospheric studies is on transiting planets, where the exoplanet’s orbit is aligned in such a way that the planet passes between the Earth and its star. During such a transit it is possible to probe the atmosphere by looking at the absorption of starlight by the atmosphere at different wavelengths, to get an insight into its composition. In addition, we can search for the weak variations in the light coming from the system as the planet travels along its orbit, and we see varying parts of the planet’s day-side (similar to the phases of the moon).

At DCU, the research on exoplanets is focused on studying the atmospheres of these alien worlds. We are currently looking in particular at the atmospheres of hot-Jupiters and super-Earths.
In addition, we are investigating new ways to search for and characterise rings around exoplanets using telescopes on the ground.

Magnetic fields can often influence how plasmas move in astrophysical systems.  We can see this clearly from observations of solar prominences and flares which are almost entirely caused by magnetic fields.  These fields are important in other areas of astrophysics too such as star formation, planet formation and neutron stars.  In many of these systems the fields are important, but the fraction of the plasma which is electrically charged (and therefore can interact with the magnetic field) is actually quite small.  This is true in molecular clouds, in which stars form, and in proto-planetary disks (see below) and also, perhaps surprisingly, in the solar photosphere.  These conditions mean we have fields which interact only with charged particles, influencing how they move, but not with neutrals.  However, the neutrals have collisions with the charged particles and so, indirectly, feel the effects of the magnetic fields.  Indeed, the charged particles themselves behave differently depending on their electrical charge and how likely they are to collide with neutrals.  All this means we have intriguingly complex physics and a so-called multi-fluid magnetohydrodynamic system. We have strong expertise in this area, specifically in computational approaches to studying such systems. These are intensely complex systems and the simulations which we design and execute require huge computational resources.  As a result we use some of the biggest supercomputers in the world for our work (e.g. those available through PRACE).
Proto-planetary Disks
Astrophysical Turbulence

Turbulence is ubiquitous in astrophysics.  It has been known for a long time that the interstellar medium (ISM) is turbulent and of particular interest is turbulence in molecular clouds, the nursery for virtually all star formation in the universe.  We use our expertise in weakly ionised plasma physics to understand how such turbulence can influence the initial conditions for star formation.  We study both magnetic reconnection in these systems as well as the statistics of the turbulence to understand, at least in a qualitative way, the influence of weak ionisation on the turbulence.  We also work on the influence that ISM turbulence can have on the acceleration of cosmic rays around supernova remnants, as well as some aspects of the acceleration process itself. 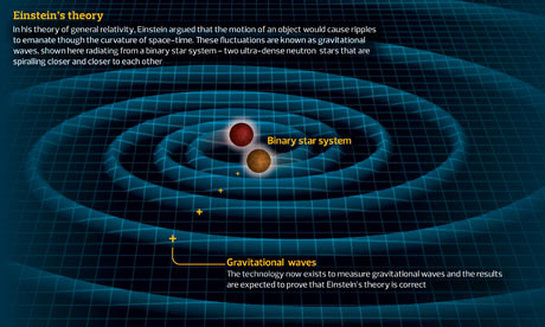 The gravitational wave signal expected on earth due to the merger of two black holes outside our own galaxy is minuscule. The gravitational waves generated stretch the arms of the detectors which are trying to detect them. The amplitude of the  stretching is directly related to the mass of the system that merged but the stretch generated by the gravitational waves is tiny - only a fraction of the size of a proton! Nevertheless the first detections of gravitational waves were made by the LIGO team in 2016 resulting in the award of the Nobel Prize to Rainer Weiss, Kip Thorne and Barry Barish in 2017. 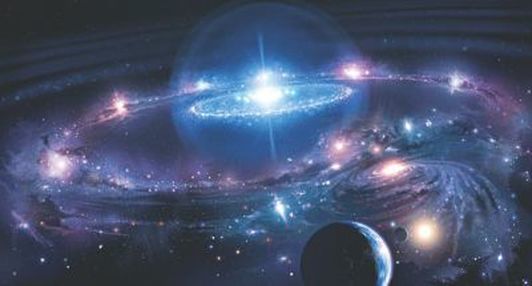 The Cosmic Censorship hypothesis was developed in 1969 by British physicist Roger Penrose. It states that the Universe contains no singularities that are visible to the faraway observer, especially from the vicinity of a black hole. All the familiar singularities are located at the center of a black hole, which are hidden behind the event horizon that makes it invisible. Since what goes on in the region of singularity (a point in space-time at which the space-time curvature becomes infinite) is completely hidden from observation, we cannot see the comic events that take place inside that region. And this cosmic “unseeing” is referred to as cosmic censorship hypothesis and the singularities are called naked singularities. This essentially prevents the breakdown of physical laws from leaking into a region of space where we expect physical laws to be unbreakable.
​
At the singularity, the laws of science and our scientific ability to predict the future break down. And when an observant is stationed outside the black hole, the observer won't be affected by this failure of predictability as neither light nor anything whatsoever will reach him/her from the singularity. And when these naked singularities produced by a gravitational collapse, a celestial-type editing takes place that makes what truly takes place inside the black holes unknowable. 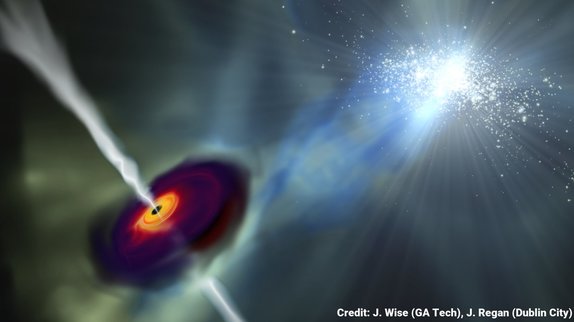 Super-Massive Black Holes (SMBHs) lie at the centre of most, if not all, massive galaxies. They dominate the gravitational potential and what's more they have an enormous impact on star formation in the entire galaxy. Their formation mechanism however remains a mystery. No single theory exists which can explain the formation of the entire population of SMBHs across cosmic time.

SMBHs are defined as black holes with masses greater than 1 million times the mass of the sun. They are observed in their "quasar mode" out to redshifts greater than six - less than 1 billion years after the big bang. This presents a significant challenge to current theories of structure formation since it is unclear how such massive objects could have formed so early in the Universe.

The image above shows a model where massive black holes formation is spawned in regions of high radiation. Intense radiation (specifically radiation between 11.2 and 13.6 eV) dissociates molecular hydrogen, which in the early Universe is the only route to star formation. If molecular hydrogen can be suppressed then gas must cool through atomic lines. Atomic line cooling is much less efficient and this means the gas remains much hotter and the Jeans mass is raised. Gas collapsing in these conditions cannot fragment efficiently and instead should form massive stars. These stars will be short lived die to their enormous masses and will be unable to remain in hydrostatic equilibrium for much longer than 1 million years (a very very short time in astrophysical terms). Gravitational instabilities will overwhelm the radiation pressure resulting in the formation of a massive black hole with a mass of approximately 100,000 times the mass of the sun. Such a massive black hole, forming in the early Universe presents the ideal seed for the super massive black holes observed.

Dr. Masha Chernyakova is heavily involved the Cherenkov Telescope Array which will scan the skies in search of extreme energy events. The Cherenkov Telescope Array (CTA) (https://www.cta-observatory.org) is a multinational, world-wide project to build a new generation ground-based gamma-ray instrument with an order of magnitude improvement in the sensitivity compared to the current instruments and extension of the accessible energy range to above 100 TeV. There are two sites for CTA, one on La Palma in the Canary Islands, the other in Chile close to the ESO VLT and ELT telescopes.
The CTA will explore our Universe in depth at very high energies and investigate cosmic non-thermal processes. CTA will serve as an open observatory for a wide astrophysical community, and will be the principal instrument that will provide deep insight into the generation of the most energetic particles in nature. The CTA Consortium consists of over 1200 members working in 200 institutes from 32 countries. CTA is included in the 2008 roadmap of the European Strategy Forum on Research Infrastructures (ESFRI). It is one of the “Magnificent Seven” of the European strategy for astroparticle physics published by ASPERA, and highly ranked in the “strategic plan for European astronomy” of ASTRONET.

Currently scientists from DCU are involved into the scientific simulations needed to define best observational strategy. They also explore of the need for complementary observations at other wavelengths to detect and interpret high energy sources. 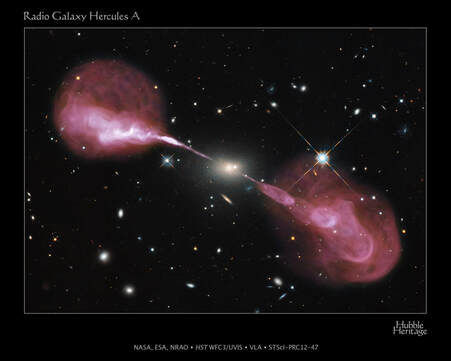 ​Some galaxies produce powerful jets of relativistic, magnetised plasma that emanate from the centre of the galaxy and can extend into the surrounding intergalactic medium (IGM). These relativistic jets are thought to be powered by supermassive black holes that are accreting material in the presence of strong magnetic fields. However, the exact nature of the jet magnetic field structure and its particle composition are still not well understood. It is also unknown why some galaxies produce powerful jets while others do not. Throughout their lifetime, these jets can inject a large amount of energy into the IGM, potentially enrich the IGM with heavy elements and magnetic fields, and produce ultra-high energy cosmic rays. Determining exactly how these jets transfer energy and material to the IGM is essential for understanding their impact on the evolution of galaxies and clusters of galaxies. Some of the best images of these jets can be provided by observations at radio wavelengths, such as with the Low Frequency Array (LOFAR), which has a station in Ireland.

​Uncovering the origin of cosmic magnetic fields is a major science goal in astrophysics. Studies of cosmic magnetic fields enable us to better understand the influence of magnetic fields on a range of different astrophysical scales (in galaxies, galaxy clusters, and the cosmic web), in addition to providing important information on the physics of the very early Universe. However, magnetic fields are difficult to measure because they cannot be observed directly, so some tracer of the magnetic field has to be used (like iron filings showing the field lines around a bar magnet). Radio observations can illuminate the presence of magnetic fields through the detection of synchrotron radiation and also through an effect known as Faraday rotation. In particular, Faraday rotation provides a very sensitive probe of magnetic fields in the tenuous thermal plasma of filaments and voids of the cosmic web. Improving our understanding of the strength and morphology of the magnetic fields in these regions will help to discriminate between competing models for the origin of cosmic magnetism, such as a primordial origin or at later times through galactic outflows. Assessing the magnetization of the Universe on large scales is also crucial for testing models of dark matter. For example, axion-like particles (ALPs) are a promising candidate for dark matter and they are predicted to oscillate into high-energy photons (and back) in the presence of background magnetic fields.